Lupulin Brewing Company and Blake’s Hard Cider Company introduces PB & Jam
Big Lake, MINN - Lupulin Brewing has announced a partnership with Blake’s Hard Cider of Michigan
to provide its customers with a unique and craft collaboration. This experience is created by combining
Lupulin Brewing’s CPB Chocolate Peanut Butter Porter with Blake’s Hard Cider’s Triple Jam for a
decadent “PB & Jam” beverage. Rollout plans will start initially within the C&L Distribution territory in
Minnesota, Global Distributing in Sioux Falls, South Dakota, and D-S Beverage in Fargo, North Dakota,
as these partners are common to both companies.
“We are honored to be working with a notable company like Blake’s Hard Cider Co. to pair their
best-selling cider, a three berry semi-sweet (Triple Jam) with Lupulin’s award-winning CPB, Chocolate
Peanut Butter Porter, (U.S. Open Beer Championship Bronze Medal). The combination of these two
products, our two family-owned companies, and similar strategies for growth opens up numerous
opportunities within markets outside of Minnesota. Simultaneous to the launch, Lupulin is actively
working with Blake's sales team on introducing distribution partners within the state of Michigan.”
stated Jeff Zierdt, President & Co-Founder.
Chelsea Cox, Director of Marketing at Blake’s Hard Cider, stated recently, "We pride ourselves on
offering our customers an adventurous exploration of our craft, so a collaboration with a passionate
brewery such as Lupulin presents us with endless opportunities that we're thrilled about. Triple Jam
is the best-selling craft cider SKU in the Midwest; it's just so approachable and balanced, so throw in
CPB and you have this incredible complexity of smooth and nutty with slight fruit acidity.” The Blake’s
team also expressed their excitement for the opportunity to provide a collaborative experience to
their long-standing customers in Minnesota, a market that has supported their brand early-on.
Brady Olson, Regional Sales Manager at Blake’s Hard Cider and Sean Kollander, Craft Manager at C&L
Distributing, played pivotal roles in executing this collaboration. “We are super excited to introduce
the concept within our off-premise locations with a floor display as early as January 11th. Our big win
will be when on-premise (bars & restaurant) locations are allowed to open back up in Minnesota to
showcase the PB & Jam in a pint glass”, said Kollander.
Lupulin Brewing is a family-owned microbrewery and taproom located in Big Lake, MN and Sioux Falls,
SD, dedicated to making unique beers with attention to quality and flavor. Our company philosophy is
one of community involvement, access to the public, and a little splash of idiocracy along the way.
Lupulin Brewing can be found online at www.lupulinbrewing.com, on Facebook (@LupulinBrewing),
Twitter (@LupulinBrewing) and Instagram (@lupulin_brewing).
Blake’s Hard Cider Co., established in 2013, is an independent, family-owned and operated Michigan craft cidery. Located on a 1000-acre orchard in Armada, Mich., Blake’s Hard Cider was founded on the values of its more than 75-year farming roots. By growing, pressing, and fermenting our own apples on our farm we’re able to proudly and consistently introduce a truly authentic and uncompromised craft hard cider experience. Blake’s Hard Cider can be found online at www.blakeshardcider.com .on Facebook
(@blakeshardciderco) and Instagram (blakeshardciderco). 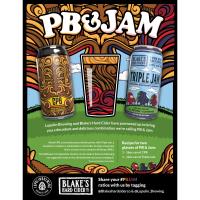